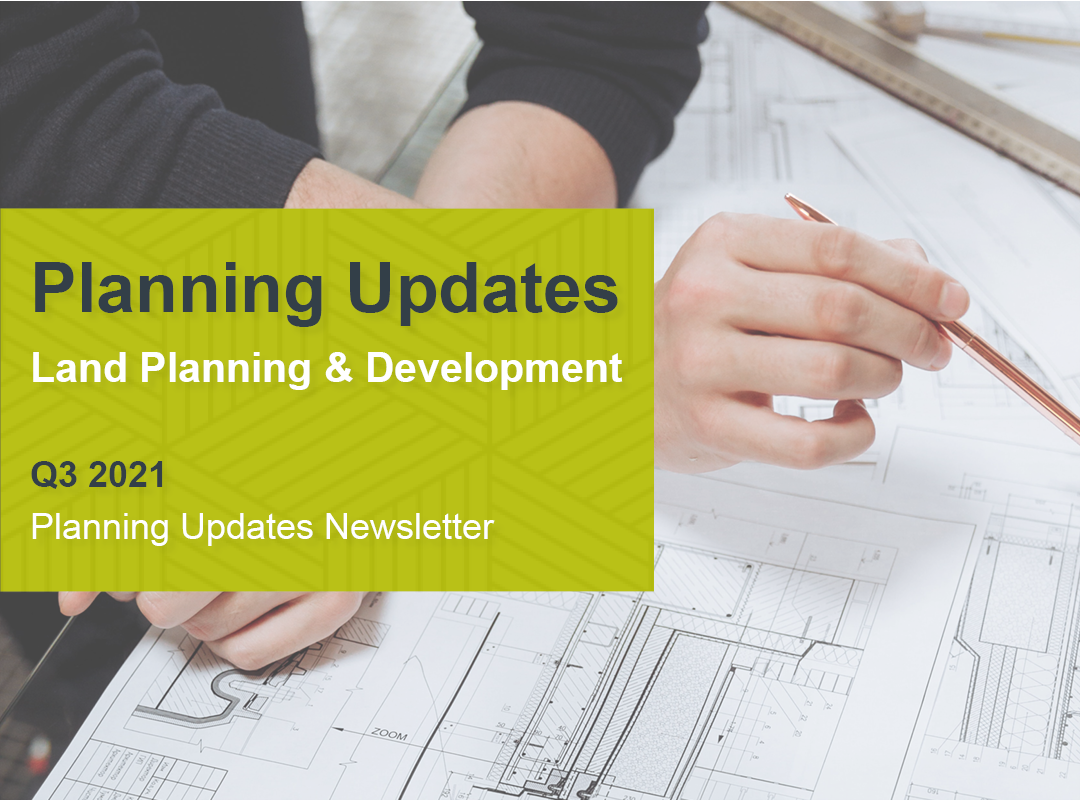 The Government has published a consultation to the Nationally Significant Infrastructure Planning (NSIP) regime that seeks views on its procedures from those who engage with the regime.

The consultation covers a number of areas including:

The Government are inviting residential developers to bid for a share of a £150 million package by offering plots for sale as First Homes, aimed at first-time buyers and key workers. The First Homes Scheme is aiming to provide 1,500 homes by March 2023. See our Q2 Planning Update for more information on the First Homes Scheme.

Land in growth areas will benefit from automatic permission, urban renewal land however, will be approved in principle. This will force Councils to be more development-led and approve residential schemes.

The Planning Bill is expected to be presented before parliament in Autumn 2021 with further discussions expected. 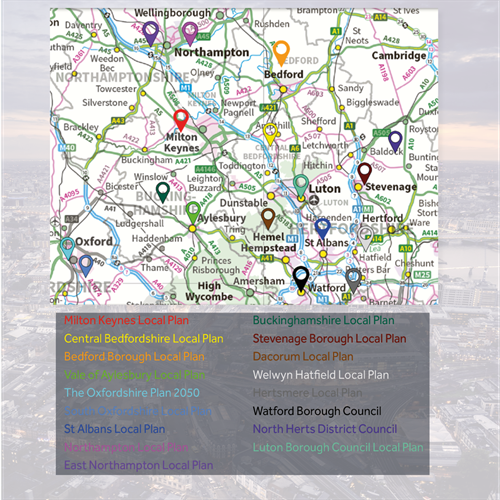 Milton Keynes Council currently have the adopted Plan:MK as of 2019. There is provision for a new local plan to be submitted for examination by the end of 2022. However, due to time frames, a more realistic timescale would see a new local plan submission in 2025.

The recent approval of the South-East Milton Keynes (SEMK) expansion will provide development between Bow Brickhill, Woburn Sands and South of Wavendon. The total 198 hectare site has been allocated for around 3,000 homes.

Central Bedfordshire Council have received the Planning Inspector’s Final Report, stating the proposed modifications are sound. The Council have stated that this concludes the Examination process, allowing the plan to become adopted. If you are a landowner and have received interest regarding your land, do get in contact for a discussion.

The Local Plan was adopted at Full Council on the 22nd of July 2021, setting out how and where new homes, jobs and infrastructure will be delivered in Central Bedfordshire. The adopted plan can be found here.

Bedford Borough have been working on a local plan development strategy 2040 and are open for consultation running from Tuesday 29th June to Friday 3rd September 2021. The responses will now be considered in preparation for submitting the (draft) plan. Landowners who are development minded should seek to comment on the sites put forward.

The Planning Inspector has issued his final report to the council which can be found here. This report finds the VALP to be a sound plan, subject to the modifications he has specified, meaning the modified VALP can now be considered for adoption.

Full Council have considered the Inspector’s Report and have formally adopted the VALP. The adoption statement, adopted plan and sustainability appraisal report can be viewed here.

A strategic vision for the county has been agreed by all Oxfordshire’s local authorities as of 1st June 2021. The consultation on Spatial Growth Options (including scale and Broad Locations of Growth) sets out the following key themes to move forward:

The consultation is open until Friday 8th October 2021. The current timeline sets out that during Spring 2022 the consultation on submission (draft) Plan (Reg. 19) will begin, submission is expected by September 2022, and adoption by May/June 2023. Subject to planning Inspectorate.

St Albans City and District Council are preparing a new local plan 2020-2038. The ‘call for sites’ has already been put out, with the consultation period ending on the 8th March 2021. New sites that the Council will consider for its Housing Economic Land Availability Assessment (HELAA) should be capable of delivering 5 or more dwellings, or economic development sites of 0.25 hectares or 500 square metres of floor space. Currently, the council are undertaking a Green Belt review and reviewing the site selection. The Reg 18 consultation is expected to begin in Spring/Summer 2022.

West Northamptonshire Council sets out its vision, objectives and strategic policies for delivering growth up to 2029. The local plan has had its examination of soundness by the Inspectors on the 4th February 2021.  Following the Inspectors Initial Letter, dated 17th March 2021, there are various modifications required and the Inspectors stated the currently “we are in the early stages in the examination”.  The dwelling requirement for Northampton Borough is set at 18,870 net additional dwellings, the Inspectors noted that the provision of new housing in Northampton “has not taken place at the pace envisaged”. This will open up opportunities for landowners in the area, if you feel your land has development potential do get in contact.

The East Northamptonshire Local Plan Part 2 was submitted to the Secretary of State on 29th March 2021. The local plan is currently under examination and the Inspector will provide modifications before adoption (expected in summer/autumn2021). You can find the submission of the Local Plan Part 2 here.

A local plan will be produced within 5 years of coming into being, by April 2025. It is expected that during 2021, discussions with Buckinghamshire residents and stakeholders will address the issues of the area whilst looking to the future. A call for brownfield sites was issued on 16th February 2021 and ended on the 6th April 2021. A draft Statement of Community Involvement (SCI) is expected to be adopted towards the end of 2021.

The Stevenage Borough Local Plan was adopted in 2019, replacing the District Plan. The plan seeks to provide around 7,600 new homes. The local plan can be viewed here. It is likely that this local plan will not be reviewed until 2024. There may be an opportunity to discuss speculative development land which could come forward when the Local Plan is reviewed.

Dacorum Local Plan (2020-2038) went under consultation from November 2020 to February 2021 for the Emerging Strategy for Growth. The local plan has not yet been adopted. Additionally, Dacorum district are developing a Joint Strategic Plan for the South West Hertfordshire area covering Dacorum, St Albans, Three Rivers, Watford and Hertsmere.  A Cabinet meeting has been scheduled on 21st September 2021 to review the consultation comments and examination.

Currently, Welwyn and Hatfield’s Local Plan has finished the Stage 8 hearings (closing on 27th August 2021). The timetable for the New Local Plan lays out that from mid-September to mid-October the main mods for consultation with Inspector, and incorporate the feedback so that it can be considered at Full Council on 4th November. The Inspector’s Report is expected to be completed from mid-February to mid-March, before adoption in Spring/Early Summer 2022. This means for landowners in the area, until the local plan is formally adopted, potential development land will not be confirmed. You may still be approached by developers in which case Kirkby Diamond would be happy to represent you.

Following the end of Stage 9 in the examination process, the Inspector has requested the Council submit a list of additional sites that have those examined to at least provide a FOAHN of 15,200 dwellings. Additional Sites should be submitted on or before the 17th September 2021.

The Inspector said, “you will need to comparatively assess the weight of evidence determining exceptional circumstances to remove land from the greenbelt on a site-by-site basis”. If you are aware of the St Albans case at Bullens Green Lane, this could provide greenbelt landowners with development opportunity in Welwyn.

The full letter from the Inspector can be found here.

Hertsmere’s draft local plan has been published setting out how the borough will grow over the next 15 years. The draft Local Plan will be considered by Councillors on the 14th September and full Council on 30th September. The next stage is a consultation period of 6 weeks will commence at the beginning of October 2021. The following stage is required before adoption, a draft plan is estimated to be submitted in 2022 to a government appointed Inspector.

The final draft Watford Local Plan consultation finished in January 2021, the comments are currently being considered before submitting the plan for examination.  The local plan was submitted to the Secretary of State on the 6th August 2021 for examination, with the Inspector appraising the local plan as of the 25th August 2021.  Hearings are expected to take place from December 2021 to early 2022 and adoption is expected in June 2022.

The Inspector held the final examination of the local plan in February 2021, with a schedule of the Inspectors further modifications in March 2021. As of July 2021, the consultation period has finished on the Further Proposed Modifications. The Inspector will be reading and considering all the representations that have been submitted. Dependent on the points raised in the representations, it is expected the Final Report will be issued to Council in early Autumn 2021.

The council are currently in the early stages of the review of the Luton Local Plan and in due course will issue a call for sites for development sites to come forward and be considered in the new local plan. Currently, there are no exact dates or time frame.

Kirkby Diamond have operated many local authorities, having acted for each client delivering an exceptional service and tailoring each landowners’ interests when making deals. Kirkby Diamond are fully aware that each landowner has a unique case and having accumulated as a team over 100 years of land planning and development knowledge, we are well equipped to deal with complex matters.

Kirkby Diamond’s Land Planning and Development Team pride themselves on achieving the best deal available and providing the best course of action. Landowners with allocated development sites or landowners who have been approached by developers, do contact the Kirkby Diamond Planning and Development Team on 01908 678 800. Kirkby Diamond are able to help all clients at different stages of the planning process, whether it be submitting a strong Call for Sites application, bettering the chances of success in Local Plans or upon adoption of Local Plans acting for landowners who have been approached by developers.

Credit: Photo by Thirdman from Pexels